El Cid is an American mega-production that was filmed in Peñíscola, and marked a turning point in the coastal town's history.
It premiered in 1961 and back then, there was no such thing as digital image editing. For this reason, a massive wall and huge gate had to be built as part of the set, to hide modern buildings. This set featured in the Guinness Book of Records for many years, thanks to its huge proportions.
Another interesting fact is the number of extras that took part in the film shoot; it has been estimated that some 2,000 people were involved, including almost the entire population of Peñíscola.
The north beach was the setting for El Cid's final battle to conquer the city of Valencia; Peñíscola served as the town of Túria in the film.
Appearing in the film in almost all snapshots of Valencia is the castle of Peñíscola, national historical artistic monument, which was originally a Muslim fortress and whose reconstruction was begun in 1294 by the Knights Templar. In the 15th century, Benedict XIII turned it into a papal palace, one of just 3 papal seats in the whole world.

This ramp has been used by various productions as a set for their films.

Some of the scenes from El Cid filmed in Peñíscola take place here. There are truly spectacular scenes featuring hundreds of local extras heading to El Cid's final battle to conquer Valencia. These walls, perched on the Philip II Ramp, still bear the marks of the war of Independence some 200 years ago.

The Philip II ramp leads up to the Fosc Gate, which was the only entrance by land to the fortress until the 18th century, when the Gate of Santa Maria was opened, on the lowest part of the wall. The ramp is hemmed in by the Renaissance wall that forms the city's main facade and which was built in the last quarter of the 16th century. The construction works were pursued by Philip II, and involved two expert Italians who were in the king's service: Vespasiano Gonzaga, the project's designer, and Bautista Antonelli, director of works. 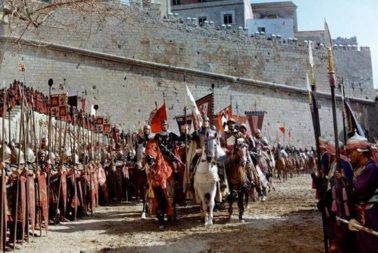 For the filming of El Cid, a spectacular set was built that mainly consisted of a massive wall and a huge gate large enough to conceal modern buildings. This set featured in the Guinness Book of Records for many years, thanks to its huge proportions. This gateway to the town stood in for the real entryway to Peñíscola, the Fosc Gate.

This gate, whose name literally means 'Dark Gate', is one of the main entryways to the town, and was opened in the 16th century. It was built by Phillip II next to the Renaissance wall that makes up the western facade of the fortress. It is adorned with bossage in white stone and military motifs. On entering through the gate, we can appreciate the internal vault set at a 90o angle from which the gatehouse is accessed. Over the main gate is a coat of arms and commemorative plaque to Philip II. This was the main gate until the 18th century, and it was designed by the renowned Juan de Herrera. The gate's ornamentation is notably military in character. 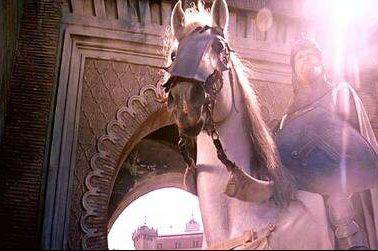 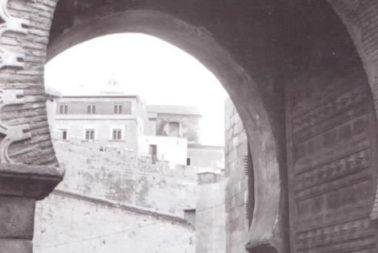